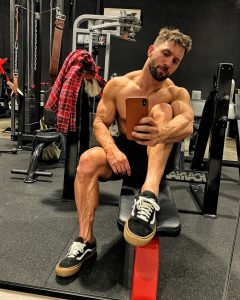 Bodybuilder and fitness model Julian Michael Smith (@smith.julian), also known as “The Quad Guy” is well known for his impressive leg development. After spending just a few minutes checking out Julian’s workout videos, you can tell that Julian most certainly knows what he’s doing when it comes to building ripped and muscular legs.

However, for most people, it is quite surprising and even puzzling that Julian works out in Vans shoes.

But why? What is it about Vans that Julian loves so much that he never seems to lift in any other shoes?

You might be surprised to know that aside from personal preference, there isn’t really another reason.

Why Julian loves working out in Vans

According to Julian Smith’s facebook, the bodybuilder likes lifting in Vans because… well… because he just likes ‘em.

I guess you could say it’s the nostalgia that brings me back to my roots. Takes me back to when I started lifting almost 14 years ago! There’s really no more ties to it than that.”

Julian acknowledges that Vans don’t necessarily help him lift more weight or dramatically improve the quality of his workouts. He simply makes the point that he feels the most comfortable in Vans, physically and mentally. Smith goes on to say that going into his workouts wearing shoes that put him in the right mindset is what matters the most to him.

As long as Julian finds comfort in working out in Van’s, chances are he won’t change his ways!

Benefits of lifting in Vans, Converse and other flat-bottomed shoes 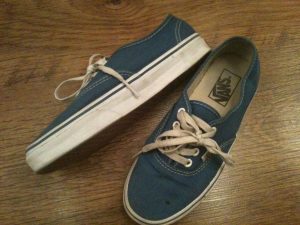 Although many would consider shoes such as Vans and Converse to be a poor choice of footwear for exercise, many bodybuilders and powerlifters swear by them.

Vans and Converse are made extremely simply. They are basically comprised of a flat rubber sole attached to a canvas that makes up the rest of the shoe. The flat soles of the shoes make them a good choice of footwear for weight lifting in general and training legs in particular.

The main reason is that flat sole shoes provide good stability for heavy lifts. Flat-bottomed shoes such as Vans or converse can really help you to feel planted given they provide an even surface to push against, unlike running shoes. The flat soles of these shoes allow you to use every inch of your foot to drive your weight upward from the ground. Furthermore, shoes like these are very low to the ground which makes it easier to exert force straight into the ground when you are squatting, deadlifting and even benching.

The sturdy sides of these shoes also provide great stability, preventing you from injuring yourself by rolling your foot over as you lift. This is one of the reasons why professional powerlifter Dave Tate loves converse in particular. In regards to squatting, Tate states that “the soles are flat and the side construction is rugged enough to push out against without a blowout or rolling over the sole”. 1

On the other hand, modern basketball shoes or running shoes are most often designed to be much more cushioned making them less desirable for heavy lifting. Typically there is a lot more cushion around the heel and arch of these shoes leaving your feet raised higher off the ground than they would be if you were wearing completely flat shoes. The cushion in these shoes is great for running since they absorb shock well, but they just aren’t the best for lifting. Due to the added layer of cushion, the force from your feet has to travel through the raised padding before reaching the floor. Not only does a lot of the energy exerted through your feet get channeled into the cushion of your shoes and not directly into the ground, but you also may experience some instability as a consequence. After all, the cushion in these shoes gives when you push down with your foot, and the slightly uneven surface may make keeping your balance more difficult. This, of course, is the last thing you want when you are lifting heavy. 2.

When you shouldn’t use Vans, Converse and other flat bottomed shoes at the gym

Vans and Converse are great for weight lifting, however, shoes such as these probably shouldn’t be your first choice for some exercises.

For any workouts that involve a lot of running or jumping, you would probably be better off using running shoes. Shoes such as these are designed to have extra cushion in certain spots to reduce the shock of your feet hitting the ground.

Flat bottomed shoes, of course, don’t have really any cushion at all which can make running, jumping or even walking long distances painful for your feet. Furthermore, using the wrong shoes for exercises such as these can result in shin splints. 3.

Keep in mind that although Julian Smith and other weight lifters love flat bottomed shoes such as Vans, this approach isn’t for everyone.

Some people simply hate Converse and Vans because their feet just don’t fit in shoes well or the shoes just might feel uncomfortable. That being said, if you just don’t feel comfortable in shoes like these, it is definitely worth exploring other options.