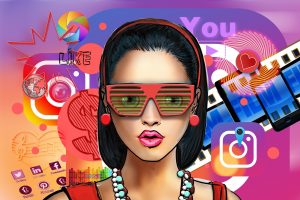 Chances are that every time you check out the explore tab of Instagram, you will come across an Instagram influencer of some sort.

This post will discuss at what point you can actually call yourself an influencer on Instagram specifically.

Definition of a social media influencer

“a user on social media who has established credibility in a specific industry. A social media influencer has access to a large audience and can persuade others by virtue of their authenticity and reach”.1

In other words, social media influencers simply have a following that values their opinions and can sway or “influence” their followers to adopt trends.

“why would someone want to become an influencer” you might ask?

There are a few different reasons. For instance, many influencers like sharing their passions and interests with their followers. However, most influencers enjoy building a following to make a bit of money on the side or even a full-time income. Typically you can find influencers in the fashion, fitness, and health/beauty niches.

After doing a bit of research by checking out marketing experts on Quora as well as other marketing-related sites, I came up with a few common characteristics of social media influencers.2 3 More often than not, if an Instagram account meets most of the following criteria, the account has the ability to effectively “influence” their followers, thus making the account owner a true influencer.

Influencers typically have large followings on Instagram. At the very least, influencers will have a few thousand followers however, more often than not the most successful influencers have hundreds of thousands of followers. After all, the more followers an account has, the more ability the account has to sway the masses to adopt trends.

This does NOT mean that accounts that buy followers or gain followers with fake accounts should be considered real influencers. The followers must be real people that are genuinely interested enough in the account to hit the follow button.

Authority- People that are considered to be influencers have some degree of credibility. For instance, a pro bodybuilder on Instagram is a credible resource to follow for bodybuilding advice because this person builds muscle for a living.

Alternatively, a model that posts about the makeup she likes to use is a credible resource to follow for beauty tips because she is a reputable figure in the beauty and cosmetics industry.

Keep in mind the engagement needs to be authentic. This means that the likes and comments need to be from real people and not robots or paid likes/comments.

Monetization- Monetization on Instagram accounts is a big indicator that the owner is an influencer. Influencers often promote products from the companies they are sponsored by. In return, they get some amount of payment often depending on how many followers they have. That being said, if you see an account recommending various products in a niche, chances are that person is being paid to do so.

So… at what point can you call yourself an influencer?….

As said before, there is no one universal list of criteria that social accounts need to meet in order to be officially deemed an influencer.

However, if you can generally fit the criteria listed above, you probably can go ahead and consider yourself an influencer.

Why you might not want to call yourself an influencer

The thing about influencers is that real influencers don’t actually call themselves influencers. You will never see a fitness model with 500k followers who promotes supplements with the word “Influencer” in his bio.

Really the people that are influencers are deemed to be influencers, often by their followers. That being said, if you are trying to be an influencer, although it sounds counter-intuitive, don’t call yourself an influencer.

Benefits and drawbacks of being an influencer

Being a successful influencer certainly has great benefits. The greatest perk for most influencers is the money. As an influencer you can earn some side income or even a full-time income depending on how many followers you have. For just posting pictures of your daily life, its not a bad gig.

Of course, in addition to the money, you would get the admiration of all of your followers as well. For some people, posting and engaging with like-minded followers with similar interests can be fulfilling.

On the other hand, however, being an influencer certainly can have its drawbacks. For one, being an influencer means sharing with a large audience your personal life. To do this on a small personal Instagram account where you know many of your followers is one thing, but to share intimate details about your life with thousands of people is completely different. You simply open yourself up to more criticism the larger your account is and for some people, this can be unsettling.