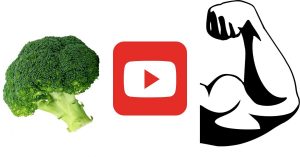 Every bodybuilder knows that in order to build muscle, our bodies need protein. However, most people think that consuming meat is really the only way to get enough protein to pack on some size.

Many people in the bodybuilding community falsely believe that a plant-based diet would limit an individual’s ability to put on muscle. That being said, it makes sense why the notion of vegan bodybuilding might seem nearly impossible.

However, various YouTube channels have helped to debunk the idea that a plant-based diet is not enough to put on some serious size. Dozens of YouTube fitness stars show how they get into amazing shape and share the additional benefits of this lifestyle.

Here you can check out 7 amazing vegan bodybuilders on YouTube for some plant-based fitness inspiration.

Nimai has never eaten meat. He was raised on a vegetarian diet and seamlessly transitioned to an entirely plant-based lifestyle in 2015. He prides himself on having built his body “cruelty-free”.

Nimai describes veganism as compassion for other animals. His main goal is to create awareness and disprove misconceptions about vegan bodybuilding.

His YouTube channel is not solely workout plans and meal prep; Nimai posts vlog styled videos that track his day from start to finish. He integrates his personal life and experiences with viewers, creating a more personal viewing experience.

In terms of fitness content, Nimai educates his viewers on how to strategically target muscle groups with his preferred lifting techniques. By sharing his meal prep on his vlogs, Nimai gives advice on recipes and caloric intake. He also puts out plenty of motivational content aimed to inspire others to take better care of their bodies.

Brian admits that he originally decided to try the vegan diet for his acne, but was inspired by the ethical approach of veganism. The inspiration to start bodybuilding came from seeing the muscle mass his older brother was able to put on.

Brian has been vegan for nine years and a certified bodybuilder for the past four. Having consumed meat and animal products for years, the change in Brian’s diet caused a reduction in his acne and helped with bloating and recovery after his lifting sessions.

Many of Brian’s YouTube videos show meal tracking strategies, meal prepping, and exercising tips. Some of the most popular videos on his channel are about his journey with acne.

He shows his viewers the negativity cystic acne brought into his life, but more importantly, how changing to a vegan diet helped his acne and physical performance.

Some videos address the common misconception of a vegan diet as expensive; Brian has posted several videos on cheap and easy meal prep.

Bianca was diagnosed with clinical depression at a young age and found exercise to be an effective coping mechanism. Bodybuilding became a way for Bianca to value herself and a source of motivation.

Similar to her boyfriend, Nimai Delgado, Bianca began a plant-based lifestyle about four years ago. She is currently a bikini competitor and certified fitness coach.

There is more to her vegan lifestyle than the food she consumes; she recommends vegan makeup brands and different vegan skincare products. In addition to physical benefits, Bianca shares how bodybuilding has boosted her confidence in herself and positively impacts her mental health. She opens up in her videos to inform and inspire others who are facing similar struggles with mental health and body image.

Natalie is a professional IFBB bikini competitor and proud vegan. Some time in her previous career in professional surfing, Natalie became inspired to switch to a vegan diet for the health benefits in addition to minimizing her environmental impact.

She also suffered from hypoglycemia, severe acne and fatigue- all of which were resolved with a vegan diet. She vlogs about her life as a vegan athlete in hopes of inspiring others to care more for their bodies and environment.

Even though Natalie’s diet is extremely clean for the most part, she does love sharing recipes for “cheat foods” such as vegan pies and mac and cheese. She is a certified Raw Chef and Raw Pastry Chef, so its safe to say she knows what she’s doing.

Rob has been a vegan for the past three years after struggling with dietary-triggered acne. In addition to losing over 20 pounds, eating a plant-based diet had positive psychological impacts on him. He believes that the mental impacts of being unhealthy can be just as detrimental to a person as the physical ones.

Rob shares his experimentation with cutting and bulking (depending on the season) and how diet should change depending on how you work out that day. In doing so, Rob educates his viewers on tracking macronutrient intake and the energy composition of food. This YouTuber also shares grocery shopping strategies to find inexpensive sources of vegan protein, to appeal to viewers who are on a stricter budget.

Stephanie became a vegetarian at the age of 10 before deciding to transition into an entirely plant-based diet in 2013. She originally embraced a plant-based diet for the health benefits, but became more dedicated to the idea as she discovered the ethical implications of veganism. Stephanie was even named the hottest vegan in the United Kingdom by PETA in 2016.

Her YouTube videos focus on building muscle mass and losing body fat with her diet and workouts. She accompanies her weight lifting regimen with a high-carb and high-protein intake, while minimizing fats.

The vlogs follow her meals as she pairs them accordingly with her workout routines. She has lots of tips for making vegan recipes and incorporating healthier alternatives to junk food.

Jeff is a California based minister with a passion for self-care through veganism and weightlifting. His doctor believes he is currently suffering from SIBO (small intestine bacterial overgrowth), which has inhibited Jeff from consuming sugar.

This condition has not affected his ability to bodybuild, but it does restrict his diet even more. Regardless of his ongoing medical struggle, he shares his values of environmentally sustainable habits paired with self-care through exercise.

In his channel, Jeff collaborates with medical professionals to help educate his audience on the benefits of subscribing to a vegan lifestyle. Jeff’s intent is to help his viewers understand their food and the impact it has on their bodies.

Hi! I'm an aspiring journalist who likes staying up to date with the latest trends in the fitness industry
Toggle the Widgetbar