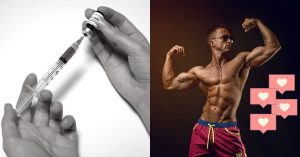 DISCLAIMER: trendifit.com does not approve of the use of anabolic steroids

One of the most overlooked matters in the bodybuilding and fitness industry is steroid use.

Doping is simply not publicly talked about much among fitness professionals. There are hundreds of bodybuilders on Instagram with incredible physiques that will avoid talking about steroid use at all costs, leaving their followers guessing whether or not they have been using drugs to improve their physiques.

Additionally, with hundreds of other suspiciously well-developed bodybuilders on Instagram claiming that they are “natural”, it can be hard to tell how widely used steroids really are.

This post aims to clear the air about how common steroid use really is among Instagram bodybuilders.

The prevalence of steroids in bodybuilding today

Although bodybuilders generally aren’t very outspoken about steroid use, most professional competitive bodybuilders do take steroids.

“One of the questions I get is ‘can you get to pro-level, IFBB pro-level naturally?’. The answer is absolutely not, or I should say 99.99% chance not…. I think it’s misleading when these guys say you can do it naturally because that’s just not the world we live in.” 1

That being said, most professional bodybuilders take steroids and most people that are trying to get to that level are also taking steroids as well. Needless to say that doping in the world of elite bodybuilding is quite common.

Now you might be thinking “Ok yeah yeah but that’s professional bodybuilding. What about the Instagram bodybuilder influencers who might not necessarily compete professionally?”. It’s a fair point to bring up.

Ultimately, at the more amateur bodybuilding level, it’s a bit more difficult to be able to distinguish the “natty” form the “naughty”. At least at the elite professional level, one can just assume that most top bodybuilders are on steroids because getting to that level naturally is nearly impossible but for your average joe fitness influencer, it can be harder to tell.

Many people, of course, suspect that the more impressive physiques in the Instagram bodybuilding community aren’t completely natural but without these individuals admitting to steroid use, one can’t be absolutely certain.

However, a few Instagram influencers have had the courage to step forward and speak out about their steroid use.

The following individuals aren’t necessarily professional bodybuilders per se but rather Instagram personalities that have come clean about their doping habits.

Jo Lindner is known for his incredible aesthetic physique. Not only that but he is widely known to be quite outspoken about his steroid use in the past.

Over a relatively short amount of time, Jo went from just an average looking guy to becoming a built and ripped athlete partly with the help of anabolic steroids as he has mentioned before. However, after some self-evaluation and seeing the negative consequences on the body that these drugs can bring, Jo decided to ditch the steroids and continue his bodybuilding career naturally.

When Jo first informed his followers that he had been using steroids he expected a ton of backlash. However, although he did receive some criticism, ever since he came clean he has received great support from his massive following. Jo now has over 1 million followers on Instagram.

One of the most well-known steroid users in the Instagram bodybuilding world is Jon Skywalker.

Jon has always been open and honest about every aspect of his fitness lifestyle, including his doping habits. In order to reach his full potential as an aesthetic bodybuilder, Jon may have felt as though he needed to take extra measures by using steroids to reach his goals.

To this day Jon continues to be active on social media. He even posts about the specific types of drugs he is taking and shares details about the time frames in which he uses them. Needless to say, he is not only honest about his doping habits but he is proud of what he is doing as well.

Known for her extremely muscular legs and glutes, Ukrainian bodybuilder Bakhar Nabieva has a remarkable physique that can be partly attributed to her steroid use.

Bakhar claims that she was bullied when she was younger for being a bit skinny. She decided to take matters into her own hands and dedicate herself to improving her physique. In an effort to take her physique to the next level, she started using steroids.

Bakhar says she does get some criticism for her lifestyle, however. She often gets made fun of for sounding like a man given that a lower voice is a side effect of steroid use among women. Regardless, Bakhar really enjoys motivating her Instagram followers with her content.

Known for his record-breaking strength and impressive physique, Larry Wheels is one of the most popular bodybuilders and powerlifters today.

However, Larry openly explains that his success can partly be attributed to his steroid use. In 2018, Larry uploaded a 14 minute YouTube video where he talks about his upbringing, the people who have been a part of his life, as well as how he first started taking steroids.

Larry explains that at around the age of 16, he got caught up in the world of party drugs which eventually lead him to steroids. However, once he started using steroids he stopped using all other drugs and an effort to be laser-focused on bodybuilding. In this video, Larry states that “I knew the risks, I was ready to die for it [bodybuilding] because nothing in my life fulfilled me like working out and getting better at the gym every day. That’s what I was passionate about”.3

That being said, Larry acknowledges that he was ready to put everything on the line to be the best at his sport that he could possibly be.

Hossein Balapour, better known as Yakiboy on Instagram is undoubtedly one of the most controversial bodybuilders on social media. Known for posting pictures of exotic cars, flashy jewelry, and other luxury purchases, Yakiboy clearly isn’t afraid to flaunt his expensive lifestyle. Furthermore, his nearly naked photos of his heavily tattooed body have given Yakiboy lots of attention and plenty of criticism as well.

In 2019, the police raided Yakiboys home and discovered his stash of steroids and was charged with six drug offenses as a result. After the incident, Yakiboy posted on his Instagram story “Let’s be realistic, this Lamborghini body they said is made from ‘steroids’ is actually 90% genetics and hard work… if its really from steroids, everyone would have Lamborghini bodies”.4

You can probably imagine how Yakiboy’s arrogance has created so much controversy.

Although a few Instagram bodybuilders are outspoken about their drug use, most simply aren’t, and for understandable reasons.

First of all, its important to remember that the possession of illicitly obtained anabolic steroids is illegal. Getting caught with steroids can result in a fine and even jail time in the United States.5

That being said, by talking about steroid use, bodybuilders may open themselves up to undue risk.

Secondly, it is important to note that bodybuilders with large followings on social media have reputations to uphold. By coming forth and publically discussing their steroid use, they would likely lose credibility among their fans and followers that look to them for inspiration and fitness advice. Not only that but these fitness stars are also well aware that they could very well lose their sponsorships with the brands that represent them for talking about illegal drug use. Given that oftentimes bodybuilders are dependent on the income they receive from these brands to make a living, they would risk hurting themselves financially by opening up about this taboo topic of discussion.

Final words: “So… can we not trust Instagram bodybuilders”

Without a doubt, there are hundreds of bodybuilders out there that avoid talking about their steroid use at all costs. Many of which outright lie and say they are natural. That being said, it can be understandable to think that Instagram bodybuilders aren’t trustworthy resources to get advice from about fitness.

However, in my opinion, I believe that there are plenty of them out there that certainly are great to get advice from even if they do take steroids without admitting to it.

Well, think about it this way… steroids are just a small part of what it takes for elite bodybuilders to get into the shape they are in. Keep in mind that most of these athletes have impeccable diets, they train smart and hard for hours every day, they take supplements, they get plenty of sleep, they get coaching ect. The list goes on and on.

The point is that these people build muscle for a living. That being said, I think that the training and diet advice of these bodybuilders should most certainly be taken seriously even if they take extra measures to take themselves to the next level.